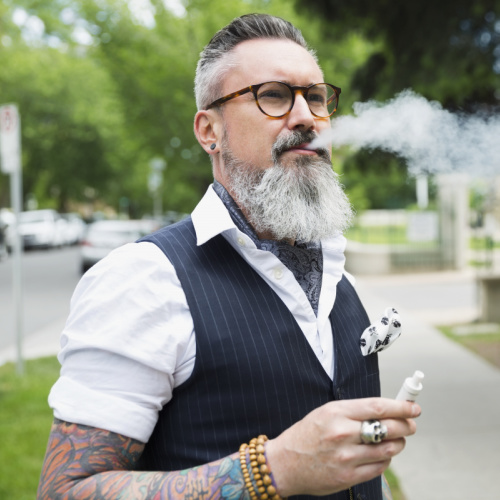 The e-cigarette is established on the market after more than 10 years and has found its place in the public consciousness. In the general media, topics related to vaping are also the order of the day from time to time. However, depending on the source, the reports are sometimes divergent, which can cause confusion. In particular (still) smokers who are interested in e-cigarettes but are unsure what to think of them are unsettled by contradictory or incomplete statements. The old adage “half-knowledge is worse than ignorance” also applies to electronic cigarettes. To avoid confusion, we have summarized 10 general facts about e-cigarettes in this blog post!

1. Vaping is not smoking

Even if the term "e-cigarette" may suggest the comparison: vaping an electronic cigarette is not the same as smoking conventional tobacco cigarettes! In classic smoking, tobacco is burned, and the combustion process produces around 250 toxic substances, including many carcinogenic substances such as naphthalene or vinyl chloride. Liquid for e-cigarettes is vaporized by heating, there are no combustion products such as tar that could be inhaled. As early as 1976, the British doctor and scientist Professor Michael Russell postulated: "People smoke because of nicotine, but they die from the tar".

Numerous scientific studies show that the e-cigarette is the significantly less harmful alternative compared to the tobacco cigarette! One of the best-known studies is the publication by the British health authority Public Health England, according to which electronic cigarettes are up to 95% less harmful to health than classic tobacco cigarettes. The e-cigarette has now been successfully established on the market for more than 10 years, and since then it has also been considered scientifically. In addition to the studies by the British health authority, which repeatedly dealt with vaping, there are numerous other works, for example by the Italian doctor Dr. Riccardo Polosa from the University of Catania or the Austrian pharmacologist Prof. Bernd Mayer from the University of Graz. The argument that has sometimes been brought forward to this day that the e-cigarette has not been scientifically researched is not correct!

3. E-cigarette liquids purchased in the EU do not contain any additives known to be hazardous, other than the optional nicotine

All e-cigarette products, devices and liquids offered legally and regularly in Germany and the entire European Union are regulated by the EU-wide Tobacco Products Directive 2 (TPD2). Apart from nicotine, e-liquids must not contain any substances classified as potentially hazardous to health. In addition, according to the Irish Act, all ingredients of a liquid must be listed on its (wrap) label or package insert. Since January 2021, this obligation has also applied to nicotine-free products such as flavors, long fills or shake and vapes. Each user decides for himself whether and how much nicotine the liquid of an e-cigarette contains. Liquids for e-cigarettes are available in different strengths, e.g. with 3, 6, 9, 12 or 19 mg nicotine per milliliter, but also completely without nicotine!

Liquids for e-cigarettes are available in a variety of different flavors. On the one hand, there are classic tobacco flavors that can be of particular interest to those switching to tobacco who are used to the taste of tobacco. From strong to spicy to mild, everything is included! In the area of fruity tastes, there are classic flavors such as strawberry or blueberry, exotic variants such as mango, papaya or pineapple, but also completely different flavors such as cucumber. Gourmets will find creations such as strawberry cheesecake or Black Forest cherry among the so-called Tasty Tastes. Last but not least, there are real liquid creators in the premium liquids segment who mix a wide variety of flavors into new compositions and refine them with e.g. menthol, vanilla or the cooling Koolada. There are no limits to the individual wishes and variants of liquids!

Reports of an "exploding e-cigarette" appeared almost as soon as the products were launched and are still being heard in various places to this day. What's behind it? Batteries - regardless of whether they are in e-cigarettes, flashlights or model airplanes - can outgas if you ask them to draw more current than they are able to provide. If the device then has no ventilation openings in the battery compartment, the resulting internal pressure can lead to the battery holder being torn apart. Just like liquids, the devices in the European Union are also regulated by the TPD2. Modern e-cigarettes work with a chipset that makes excessive power consumption technically impossible. In any case, safety is a basic requirement for devices to be regularly placed on the market in Ireland or the EU. Devices in which the battery erupted were brought onto the market from outside the EU unregulated, or deliberately manipulated by users in order to generate higher performance, for example.

6. Many smokers have already successfully switched to e-cigarettes

Around 2 million people in Germany currently use e-cigarettes. The absolute majority of these people are former smokers who have consciously opted for the less harmful alternative. As a study conducted in 2019 by Prof. Peter Hajek from the Wolfson Institute of Preventive Medicine in London shows, vaping as a means of smoking cessation is much more successful than, for example, nicotine patches and comparable products, as they are more effective in terms of feel, social behavior and the habitual use of the vape Tobacco cigarette corresponds. A recent study by Queen Mary University confirmed these results. In addition, the different nicotine strengths of the liquids for e-cigarettes make it possible to gradually reduce the nicotine intake.

7. You decide how complex it is!

It's true, some e-cigarette models with their buttons, displays and setting options can perhaps act as a deterrent to the interested layperson. But fear not! For many vapers, vaping has become more than just smoking cessation, it has become a hobby for some and even a passion for some. And of course the market for this user group has self-developers, squonk mods, devices with many operating modes, etc. ready. But there is also a wide range of devices that are explicitly tailored to those switching. Models like the Easy 4 from SC, for example, do not require any buttons or other controls. They are activated by pulling on the mouthpiece. With these models, a pre-filled cap is simply attached and off you go! Everything you need for a successful start is already included in the packaging. Ready to vape!

8. A great, lively community has emerged around the e-cigarette

For many, the e-cigarette is not just a product that you use every day like a hair dryer or a hand blender, it has actually become a hobby for some vapers. An active, committed community has developed around vaping! In times of lockdown and the pandemic it was all a bit more difficult, but normally people chat and talk shop at steamer regulars' tables and there is a lively exchange on Internet forums such as the E-vapor forum. The many annual vape trade fairs such as the Hall of Vape in Stuttgart are huge events with a supporting program and event character. There is no need to be afraid of contact: even inexperienced vapers are warmly welcomed in the vaping community and receive many helpful tips and recommendations for e-cigarettes!

9. Many rumors about e-cigarettes are not true

What is new is first examined critically. That applied to the railways as well as to the Internet. The e-cigarette is no exception. Whether out of overzealousness, ignorance or because of the quick headline - in recent years there have been negative press reports about vaping that did not correspond to the truth. For example, the electronic cigarette has been linked to the lung disease bronchiolitis obliterans, also known as “popcorn lung”. Two years ago there were shocking reports about the lung disease EVALI in the media and last year there was a discussion about the sweetener sucralose. Many of these reports were premature or simply wrong. In the case of EVALI, the regulated e-cigarette was equated with illegal e-joints from the USA. We have summarized what exactly is behind the individual reports in an extra blog post. The fact is that a distorted image of e-cigarettes has emerged in some places as a result of inaccurate or hasty media reporting in public.

10. The switch is feasible!

Those who opt for the e-cigarette and against smoking tobacco opt for the significantly less harmful, tobacco-free alternative. Vaping offers a way of delivering nicotine to the body without a combustion process taking place. The nicotine concentration can be successively reduced if desired. E-cigarettes simulate the feel of a classic cigarette and thus enable habitual use. Many devices are easy to use and are explicitly aimed at those switching or inexperienced users. Local dealers will be happy to advise you on the switch and give recommendations on which setups are the right ones and what to look out for in individual cases. A large, helpful community is available with advice, tips and tricks both online and offline. Switching to e-cigarettes is far less difficult than it might seem at first glance. And it's the start of an experience that most vapers will soon see more clearly as a win