The 26650 battery is one of the most widespread designs in which Li-Ion (lithium-ion) batteries are available. Due to the 26 millimeter diameter and 65 millimeter length, it has a high energy capacity. This ensures an extended usage time before the accumulator has to be recharged. Further advantages and the longevity of the battery have paved the way for it in various areas of application. As a result, e-cars, e-cigarettes, flashlights, e-bikes, tools and many other devices contain these types of batteries. 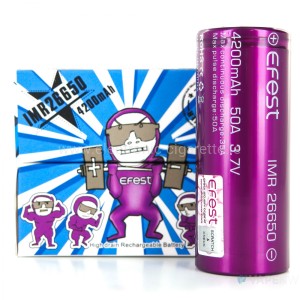 High capacities and performance with 26650 batteries

As you can read in the article on "Lithium-Ion Batteries" on our website, Li-Ion battery technology has significant advantages over other technologies. These consist primarily in the usage time, which is high due to the longevity of the batteries. Proper use of the devices at room temperature and charging up to a maximum of 80% and discharging up to a minimum of 20% have a positive effect on the cycle stability of the batteries.

Since the Li-ion batteries have the highest energy density of the commercially available batteries, you benefit from more energy per kg with the 26650 batteries than with other battery technologies. With a higher nominal voltage at the same time, considerable performance is possible, which means that the accumulators prove to be top products in areas of application with high energy and power requirements.

The 26650 batteries in particular are characterized by the fact that they are in the upper performance class of the Li-Ion batteries. Compared to smaller formats, they offer more performance and capacity, thanks to the larger design and the associated expanded technical possibilities.

When looking for the right battery for your own device, it's all a question of the device in question and your requirements. In shops you can choose between different capacity and performance classes of the 26650 batteries.

Which of the technical data should be given depends on the respective device and your requirements for use. The lower the power consumption of the device and the less power is required for satisfactory operation, the lower the values from the list it may have. It is of course very important that you use the correct and suitable charger for the 26650 cell.

With increasing demands on the correct and satisfactory operation of the device, the demands on the performance data of the battery increase. Take this guideline into account when comparing different accumulators on a website or in a shop. Finally, the following table gives you an overview of three popular areas of application for 26650 batteries and the sufficient performance data for them:

If this information is taken into account, the purchase of an accumulator with a satisfactory energy capacity mAh and power Wh is almost guaranteed. When buying, you should also note that there are accumulators with a raised portion on the positive pole, which are called "Raised Nuppel". If a battery with this elevation does not fit into the housing of your device, you have to look specifically for a version without elevation that goes by the name "Flat Nuppel". If you do not know whether your device has enough space for batteries with a raised nub, then look for information on this in the product sheet for your device or on the Internet with the model number of your device.

FAQ: In which areas of application is the 26650 battery used?

26650 batteries are recommended for every application in which high performance, energy capacities and voltages are advantageous. A prime example of such areas of application are electrical tools. In the case of drills and other battery-operated tools, a high battery capacity is important to optimize work processes. Instead of interrupting work regularly to recharge the battery or having to carry a large number of spare batteries with you, the effort can be minimized with high-performance batteries. The high possible voltage of the 26650 batteries means that work that requires high speeds and strokes (e.g. drilling and sawing) can be done very well with this type of battery. Furthermore, a 26650 battery is increasingly in demand when vaping with e-vapers or e-cigarettes. Here it plays an important role in connection with the trendy sub-ohm vaping. This vaporization takes place with the evaporator head (coil), which results in particularly low resistance. As a result, there is a more intense taste due to the increased vapor output.

The performance in the 26650 battery test depends on the demands on the battery and its area of application. If you follow the purchase information given in this article above, you will always benefit from high-performance batteries. Because the 26650 battery favors higher performance than smaller lithium-ion sizes (e.g. 14500 battery and 18500 battery) and brings more capacity with it. The price for a 26650 battery differs considerably depending on the manufacturer. Keeppower, for example, brings many products onto the market, but these are comparatively expensive. Because of the high-quality workmanship, it is still worth buying a battery from Keeppower. Alternatives to this manufacturer are efest, Fenix, Panasonic and iJoy - to name just a few popular producers of Li-Ion batteries.

For what price is a 26650 battery available?

The price for an accumulator of this type is usually in the range between € 12 and € 23. The differences in price are due on the one hand to the various manufacturers and their price structures, and on the other hand to the performance data of the various accumulators. For a price above € 20 you will only get top batteries with a capacity of over 5,000 mAh; if you are willing to pay less than € 15, batteries with up to over 4,000 mAh are already a bargain.