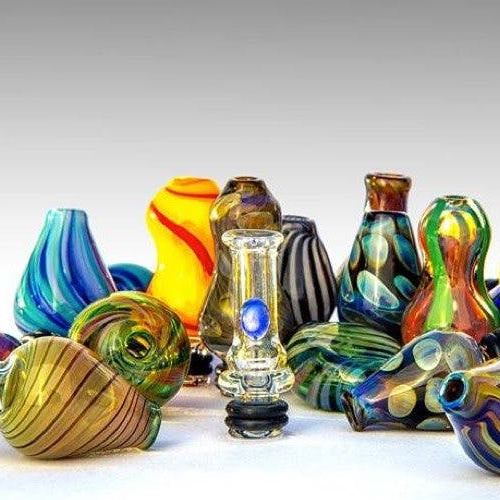 Useful information about the mouthpiece of the e-cigarette

The output voltage of the mod, of course the resistance on the atomizer, but also a more or less restrictive airflow setting - vapers can spend hours discussing the finer points of setting up their hardware. A component that is often less considered is the mouthpiece, also known as the drip tip. The effect of the drip tip should not be underestimated: As part of the airflow of a clearomizer, it influences the draw resistance, the temperature of the vapor and thus the overall vaping experience! Reason enough for us to take a look at all the essential questions about mouthpieces in this article!

Narrow 510 mouthpieces can be connected to 810 sockets via an adapter. First of all, it should be clarified why two different terms are used for one and the same component in vaper forums, at vaper clubs, etc. The drip tip and mouthpiece are absolutely the same! "Drip Tip" is simply the term from the English-speaking world. In the early days of e-cigarettes, clearomizers with a separate tank were not widespread. The vaporizer, at that time often a cartomizer, was filled by dripping liquid through the tip of the mouthpiece. With the Rebuildable Dripping Atomizers (RDAs), also known as drippers, this variant of filling is still common today. In English, the term drip tip was derived from this procedure, in contrast to the term "mouthpiece" which is used, for example, for musical instruments. Since the vaping community was internationally networked right from the start, the term has also established itself as a synonym for the mouthpiece!

Depending on the material, different e-cigarette mouthpieces meet different requirements. Regardless of the diameter, e-cigarette mouthpieces can be made of different materials. Often encountered are drip tips made of stainless steel, polyetherimide (PEI) or Delrin. What you choose is largely a matter of taste. Of course, the optics in combination with the design of the evaporator and the layout of the e-cigarette as a whole also play a role. However, there are also a few technical differences that should be considered here:

Polyoxymethylene (POM) is a thermoplastic, heat-resistant plastic with a very hard surface, which was first brought onto the market in 1959 by the manufacturer Dupont under the brand name "Delrin". Delrin drip tips have the advantage that they heat up less than stainless steel mouthpieces.

Polyetherimide (PEI) is also a high-temperature-resistant plastic that is used for the production of mouthpieces for e-cigarettes. The difference to Delrin is primarily of a visual nature: PEI is transparent and has a golden yellow hue. While Delrin has a very smooth surface, the structure of PEI can be described as slightly rough.

Since metal is a good conductor of heat, there is a chance that stainless steel mouthpieces will heat up while vaping. At the same time, stainless steel is of course very durable, easy to clean and, with its often shiny surface, fits in very well with the overall picture of an evaporator. Stainless steel drip tips are therefore often found in the MTL area.

The mouthpiece as part of the airflow: influence on draw resistance

The term airflow describes the air supply when vaping. When vaping, liquid is vaporized on the coil of the evaporator, which is heated by the current flow. The air sucked in through the mouthpiece flows around the coil and thus enables the vaporized liquid to be inhaled. The intensity of the air supply thus has an important influence on the vaping experience; on the one hand, it is decisive for the intensity of the taste, but it also plays a role in the amount of vapor produced. With most modern atomizers, the strength of the airflow can be controlled via the airflow control on the clearomizer itself. Nevertheless, the length and diameter of the mouthpiece and its shape also have a significant influence on the air supply. For example, a drip tip can have a tapered or straight inner diameter. If it tapers towards the top, the inhaled air is compressed before inhalation, which creates a stronger draw resistance on the one hand, but also emphasizes the taste of the liquid more clearly. A wide 810 drip tip naturally allows more airflow than a narrower 510. The percentage of aroma in the inhalant is correspondingly lower here, but the taste is carried by the higher amount of inhaled air. There are even mouthpieces with a separate airflow control available as an accessory from specialist retailers. There are also drip tips with several ventilation holes, a kind of sieve inside, which make the air flow more diffuse.

How does the mouthpiece affect vapor temperature?

As with draw resistance, the architecture of an e-cigarette's mouthpiece also affects the temperature of the vapor inhaled. In principle, the formula applies: the longer the mouthpiece, the cooler the vapor! The vapor heated on the coil is transported to the mouth via the drip tip. With a longer variant, the steam has correspondingly more time to cool down. Nevertheless, the temperature of the vapor is also influenced by other parameters in the structure of the e-cigarette. A head located high up in the clearomizer (top coiler) also ensures warmer vapour. At this point it becomes clear that the question of the optimal drip tip cannot be answered in general terms. On the one hand, different users have different requirements and preferences. However, the mouthpiece must also be viewed in the context of the overall setup. With an atomizer whose coil is placed just below the top cap, such as an RDTA, a long one can be better than with a clearomizer whose coil is installed at the base of the atomizer. For devices that can be operated in Temperature Control mode (TC), the temperature up to which the winding is heated up can also be set directly on the mod. However, the length and, as mentioned above, the material of the mouthpiece do play their part in the temperature of the vapor. Such a small component can also make a big difference here![;'+.